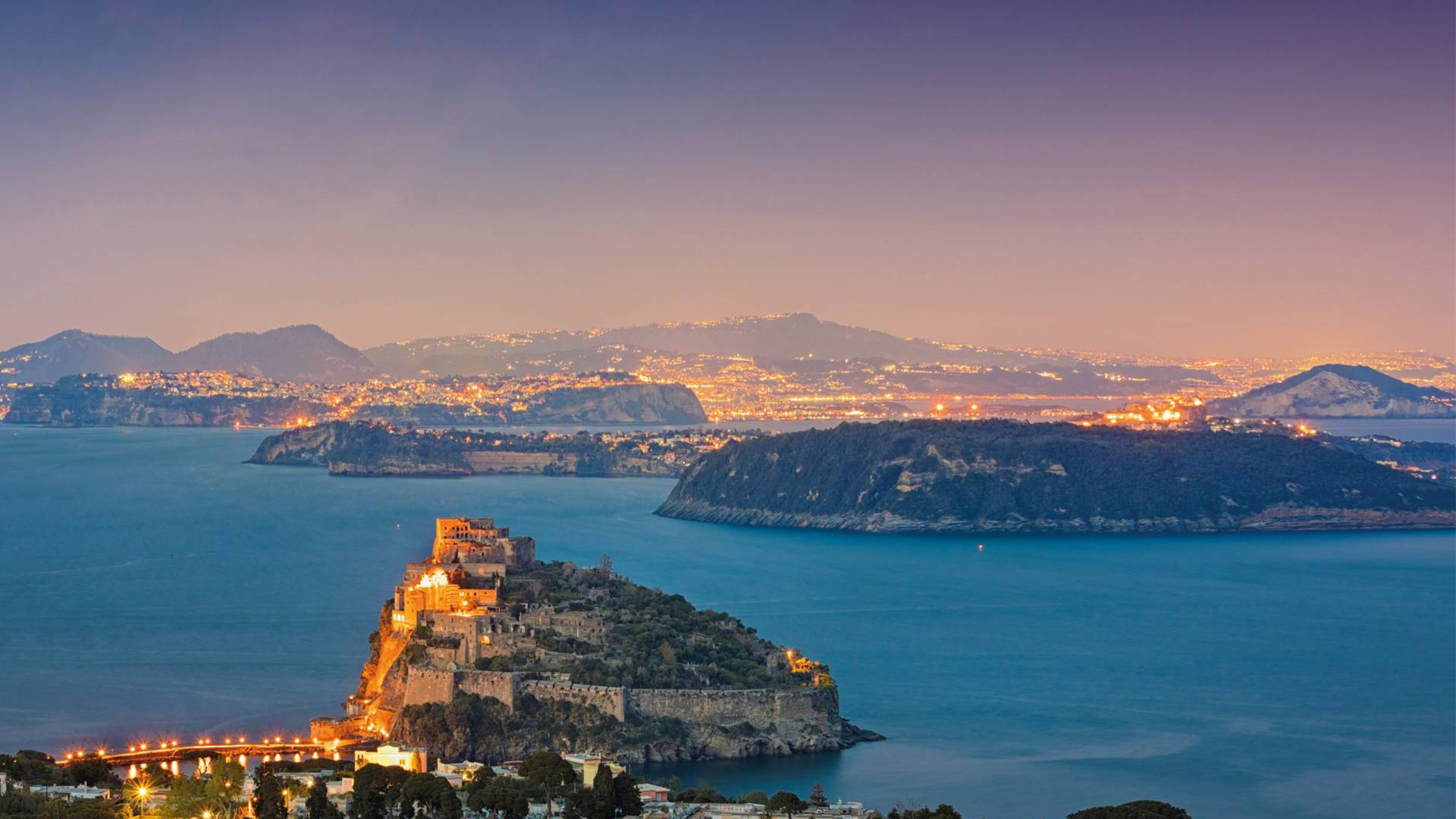 A JOURNEY AMONG OLD TOWNS AND BLUE ISLANDS

Two cities full of history, Naples and Sorrento, and two islands renowned for their natural beauties such as Capri and Ischia. Four short itineraries to discover how beautiful are the surrounding areas. 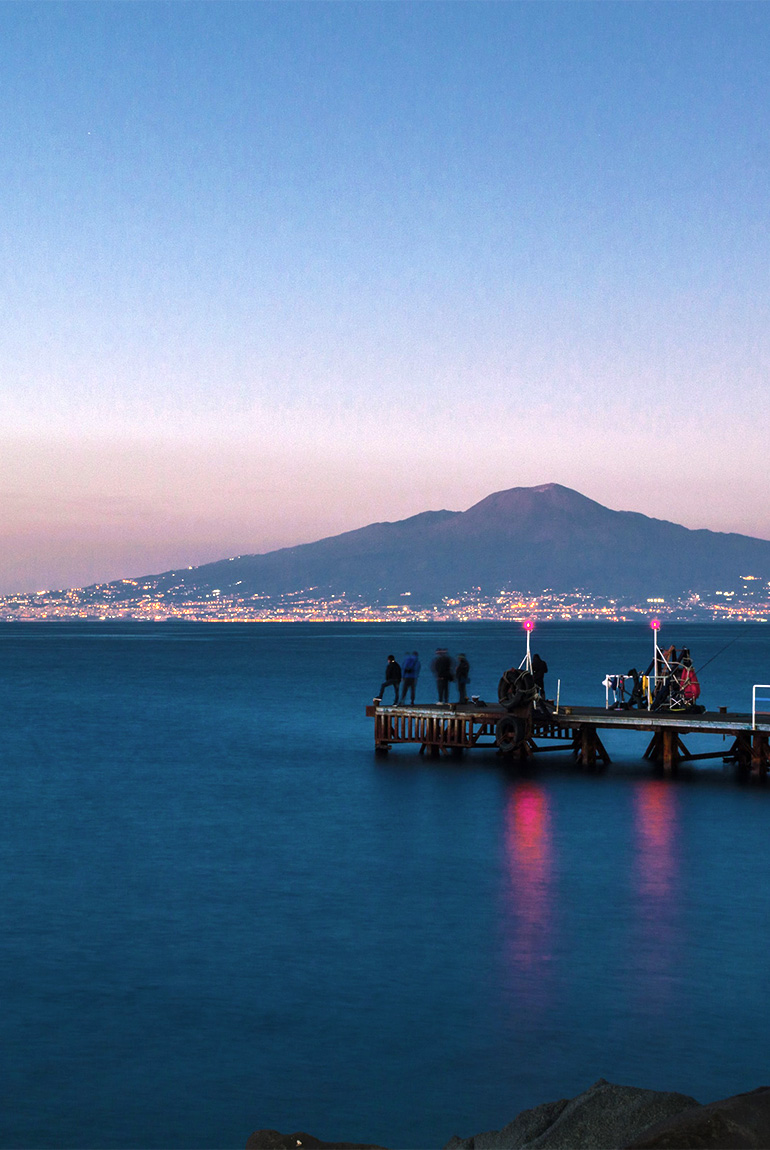 EXPLORING THE BAY OF NAPLES

Anyone who comes to the Campania region and does not visit the Bay of Naples will be missing the opportunity of experiencing the traditions, history and natural beauty of some of Italy’s most beloved cities and islands.

Sorrento is one of the most important towns to visit from Hotel Santa Caterina. With its position directly above the sea, Sorrento enjoys superb views over the entire Bay of Naples. The historic center, characterized by its maze of narrow roads and alleyways, is the perfect place to buy the town’s traditional hand-crafted wooden items, exquisite coral jewelery and quality leather goods. The arched Cloister of St Francis, filled with magnificent palm trees and great cascades of purple bougainvillea, is well worth visiting.

By local bus from Amalfi
40 minutes

By ferry from Amalfi port (from June to August)
90 minutes

Naples is Italy’s third largest city. Its historic heart still centers around the roads built here by the ancient Romans, and in particular Via Toledo, the oldest of the city’s thoroughfares. To the North, lies the hilltop district of Vomero, with its elegant villas and museums, and the neighborhood of Chiaia, beyond which lies the long green boulevard of Villa Comunale.
The National Archaeological Museum is one of the most important tourist attractions and cultural institutions in the city. The ground floor of the museum houses the Farnese Collection of sculptures, including statues from the Imperial era, whilst on the mezzanine floor there is a collection of Roman mosaics. The Salone della Meridiana is home to a collection of Roman statues, wall paintings and glass, ceramics and other items of every day use, originating from the ancient cities of Campania. 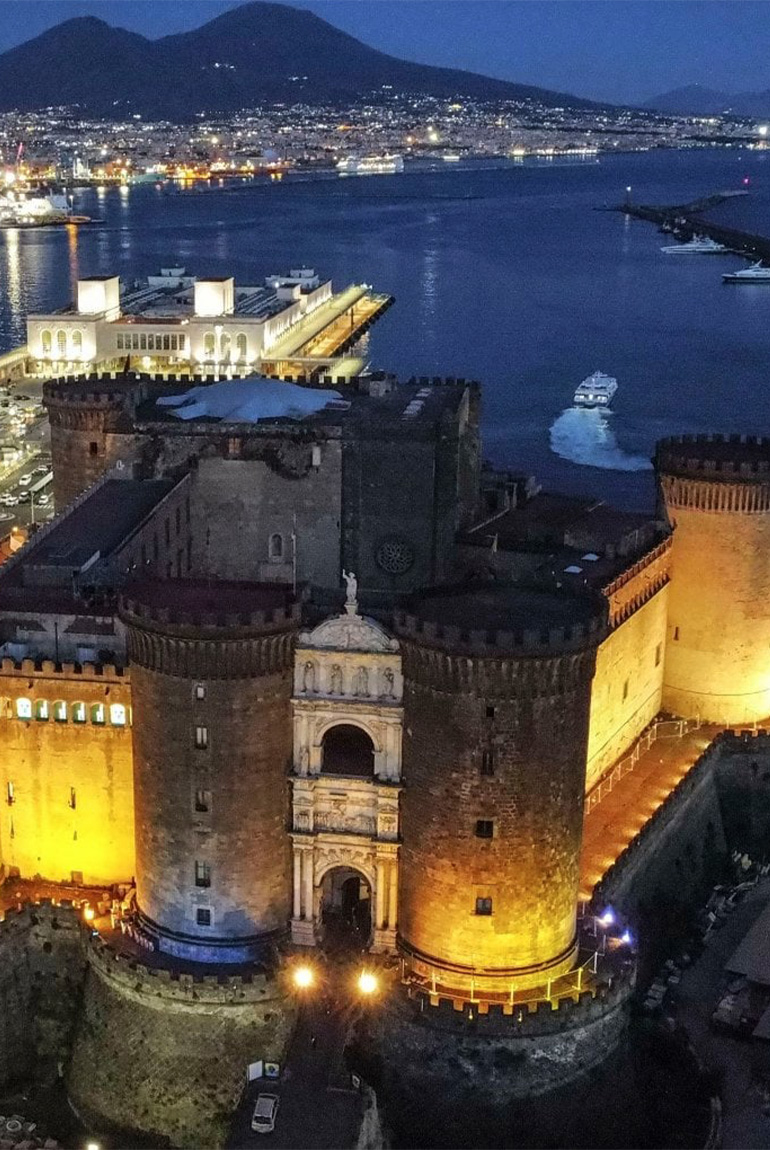 Piazza Municipio, Piazza Plebescito and Palazzo Reale together form one of Naples’ major attractions. Piazza Municipio, just steps away from the port of Beverello, is home to Castel Nuovo, also known as the Maschio Angioino. The fortress was erected in 1282 by the Angevins and successively transformed into a Royal residence by the Aragons.
Close by lies the San Carlo Theater, Italy’s largest opera house and one of the most important theaters in the world, and Piazza Plebiscito with its semicircular colonnade, similar to that designed by Bernini for his Piazza San Pietro in Rome. Palazzo Reale, built by Domenico Fontana in 1600-1602 to accommodate King Philip II, is situated directly opposite. 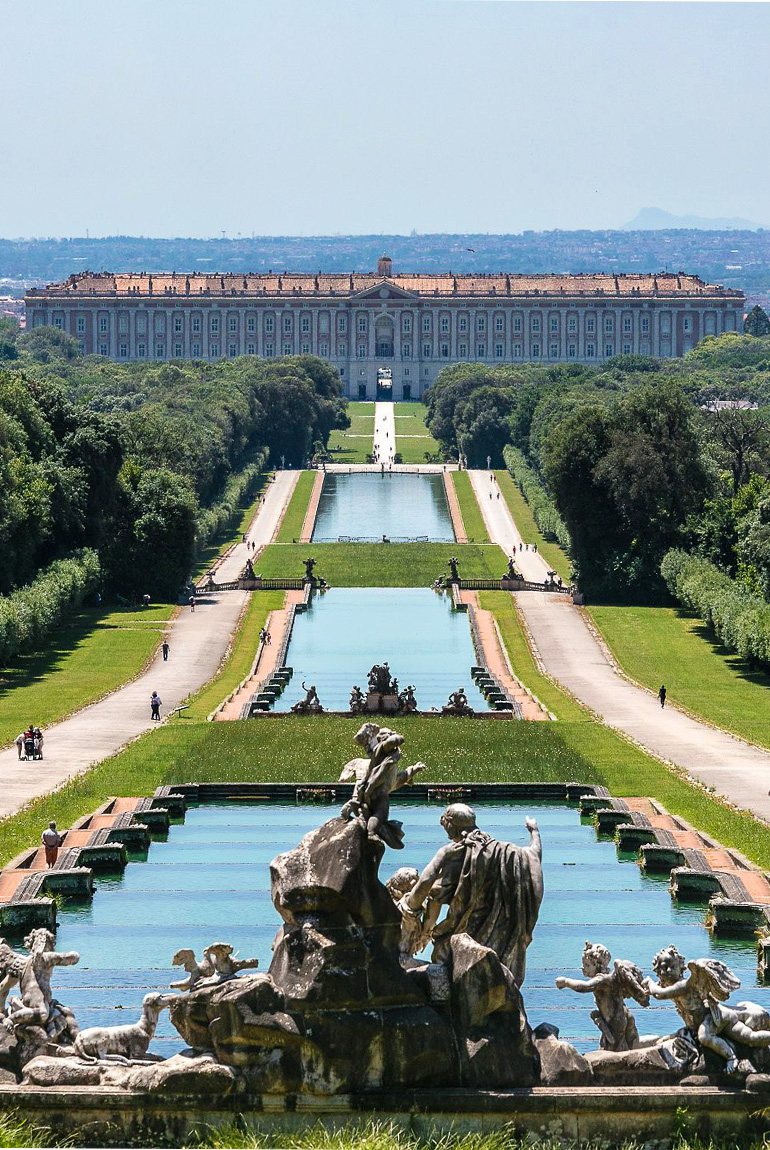 The most famous of King Charles’ royal palaces, often compared to Versailles, is situated not in Naples but at Caserta. Anybody visiting the Campania region should make sure to find the time for a visit.

The work of court architect Luigi Vanvitelli, the Royal Palace, or Reggia, of Caserta has a splendid 250 meter long facade, four identical inner courtyards and gardens which extend for some 3km north beyond the rear facade of the palace. Sculptures, fountains, cascades and a small artificial lake are all part of the enchanting landscape surrounding the Reggia.

The green and hilly Ischia is the largest of the Bay of Naples’ islands. Here every space which has not been built upon bursts with vegetation. 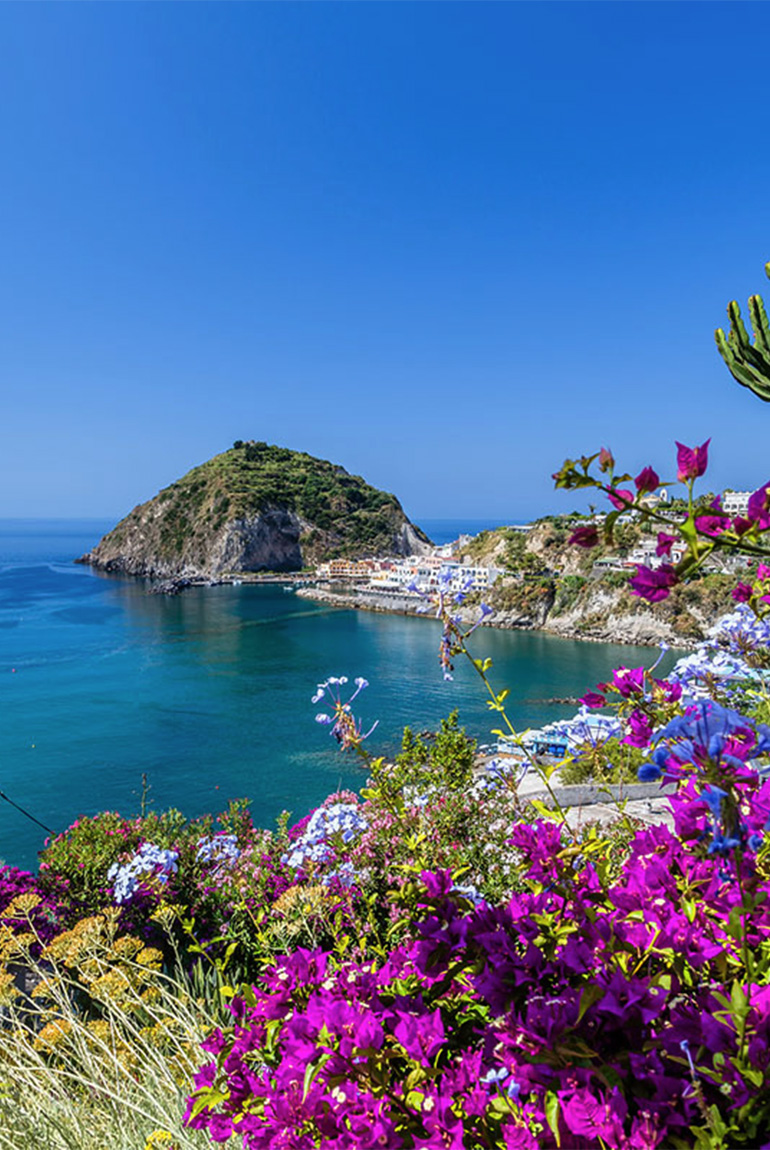 In the small villages of Casamicciola Terme, Lacco Ameno and Forio, immersed in sweet scented pine groves and olive groves, great cascades of pink and purple bouganvillea tumble over almost every wall and gate. An extinct volcano rises up from the center of the island, its slopes providing the perfect terrain for the cultivation of the grapes used to produce the island’s superb Monte Epomeo wine. 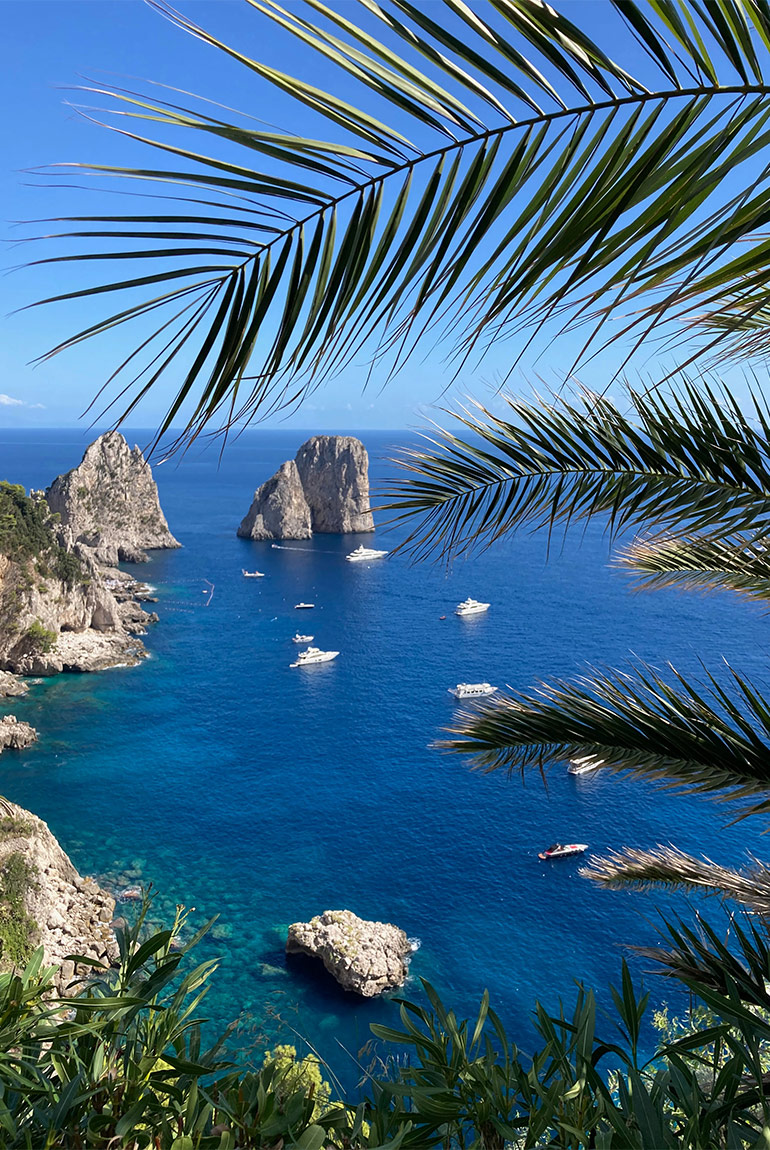 Whereas Ischia is called the Isola Verde, The Green Island, because of its abundance of lush vegetation; Capri is named Isola Azzurra, The Blue Island, after its crystal clear waters. If one leaves Amalfi on one of the first ferries or hydrofoils, a day is sufficient to visit this small island which, in the Roman period, was home both to the great Emperor Augustus and to his, licentious, adopted son, Tiberius. Discovery of the natural wonders of the island coincided with the rise of tourism at the beginning of the 19th century.
Ferries and hydrofoils dock at Marina Grande, the island’s fishing district. From here private boats are available for tours around the island and to the famous Grotta Azzurra.

From Marina Grande visitors can easily reach Capri’s legendary Piazzetta and then Via Camerelle, which is lined with exclusive fashion boutiques and luxury hotels. Close by lies the Charterhouse of San Giacomo and the Gardens of Augustus, from which there is a fabulous view of the Faraglioni rocks, Marina Piccola and the recently reopened Via Krupp.
A short ride by bus or taxi leads to Anacapri, situated on the highest part of the island and famous for its stunningly beautiful landscapes and coastal pathways. Here, a tour of the town should include a trip to the Church of San Michele, with its the magnificent hand painted majolica floor, and to the Villa San Michele, built by the Swedish author and physician, Axel Munthe.

By hydrofoil (usually only from June to September)
45 minutes

By fast ferry (usually only from June to September)
60 minutes

By ferry from April to October
90 minutes