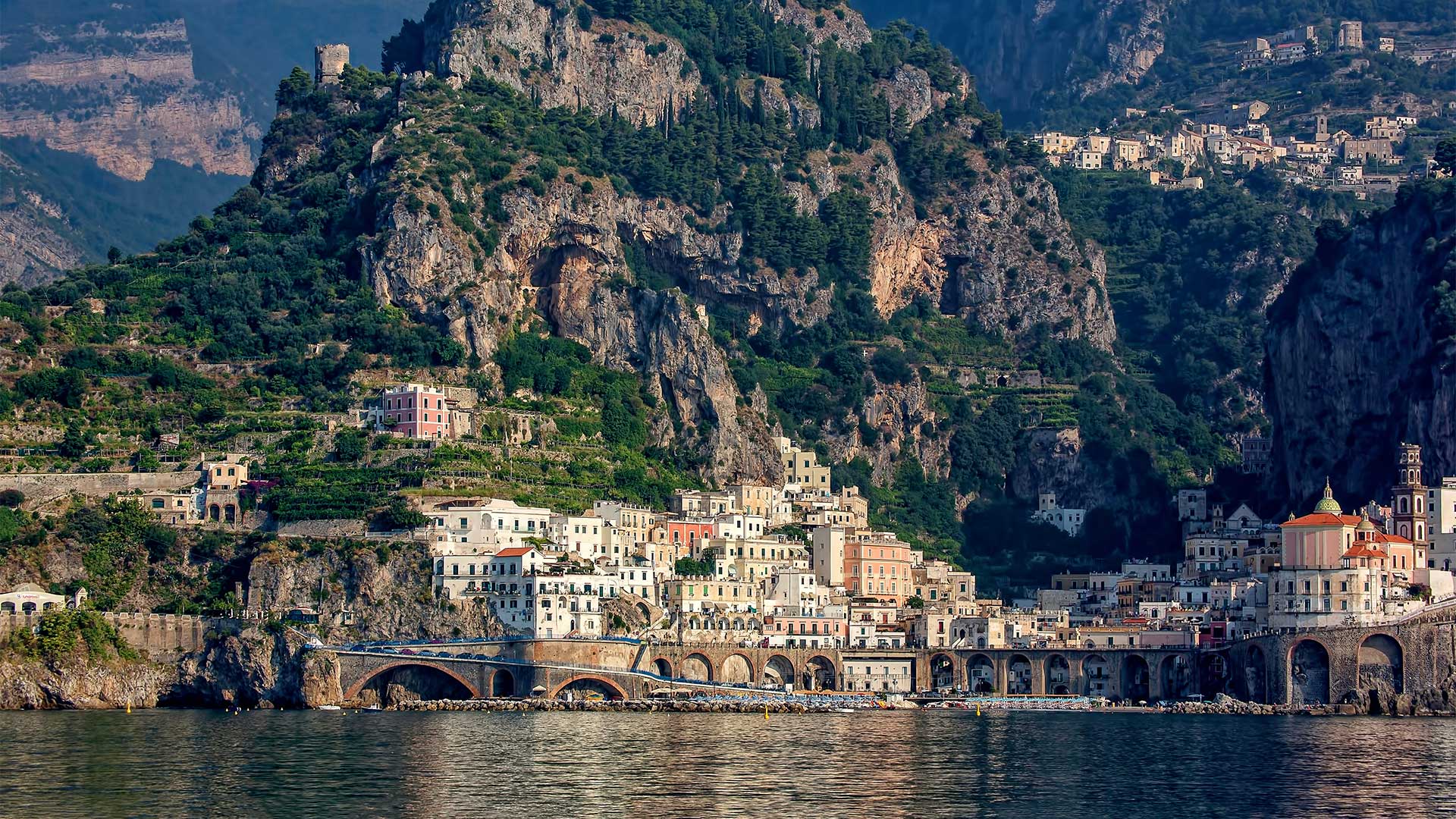 For those guests eager to explore the Amalfi Coast, Amalfi, situated just moments away from Hotel Santa Caterina, is the obvious place to start. 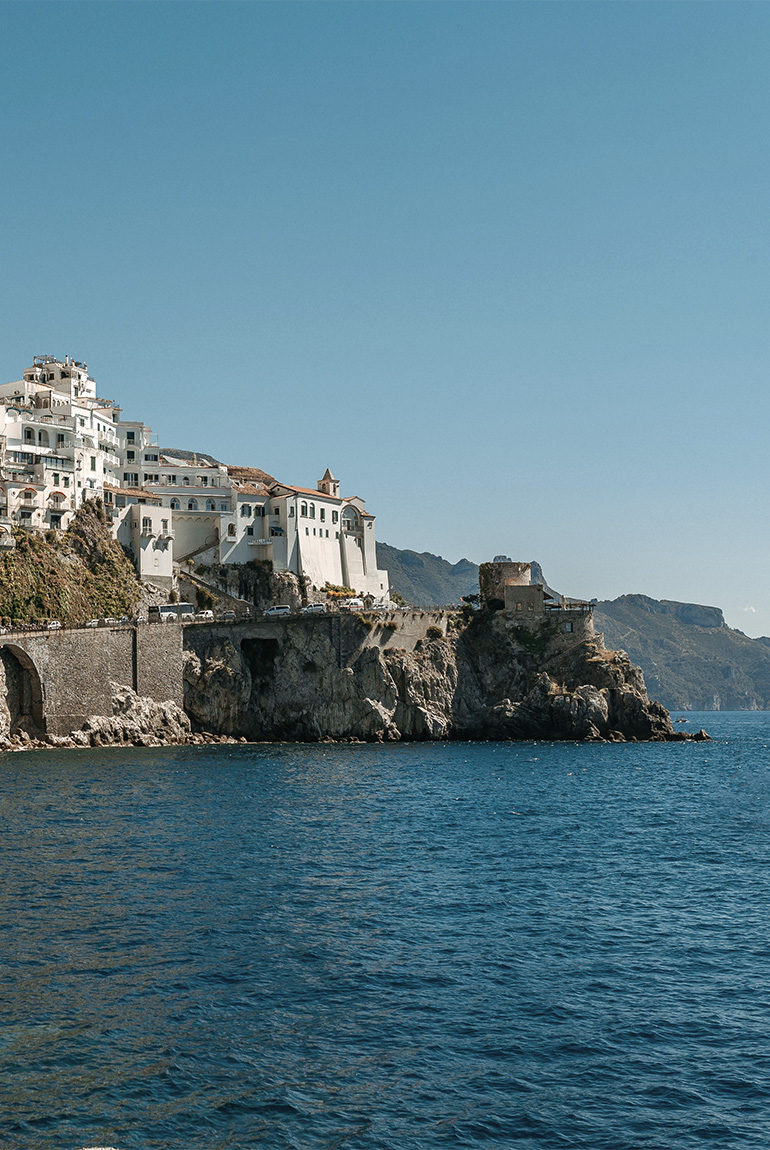 STROLLING AROUND THE COAST

This port which lies at the mouth of the Valle dei Mulini surrounded by its churches, ancient watch towers and colorful little houses, was, in the 11th century, the birthplace of one of the world’s greatest naval powers:  the Maritime Republic of Amalfi.

In that period, the laws of the sea were the laws of Amalfi. Amalfi’s navigation tables, the world’s first maritime code, governed shipping in the Mediterranean for centuries. Not surprisingly, the town conserves numerous traces of its ancient sailing tradition and the famous tables, or Tavole Amalfitane, take pride of place in the Civic Museum.

Among the many buildings to be visited; the Cathedral of Sant’Andrea, with its imposing facade and bronze doors; the Cloister of Paradise, built in the 13th century to house the tombs of the town’s most illustrious citizens; and the Paper Museum, situated in the Valle dei Mullini in an old 13th century paper mill, are, perhaps, the most noteworthy.

We do not recommend driving, as there is little parking available

From Amalfi, heading in the direction of Salerno, we soon reach another of the most enchanting towns on the Amalfi Coast, Atrani. 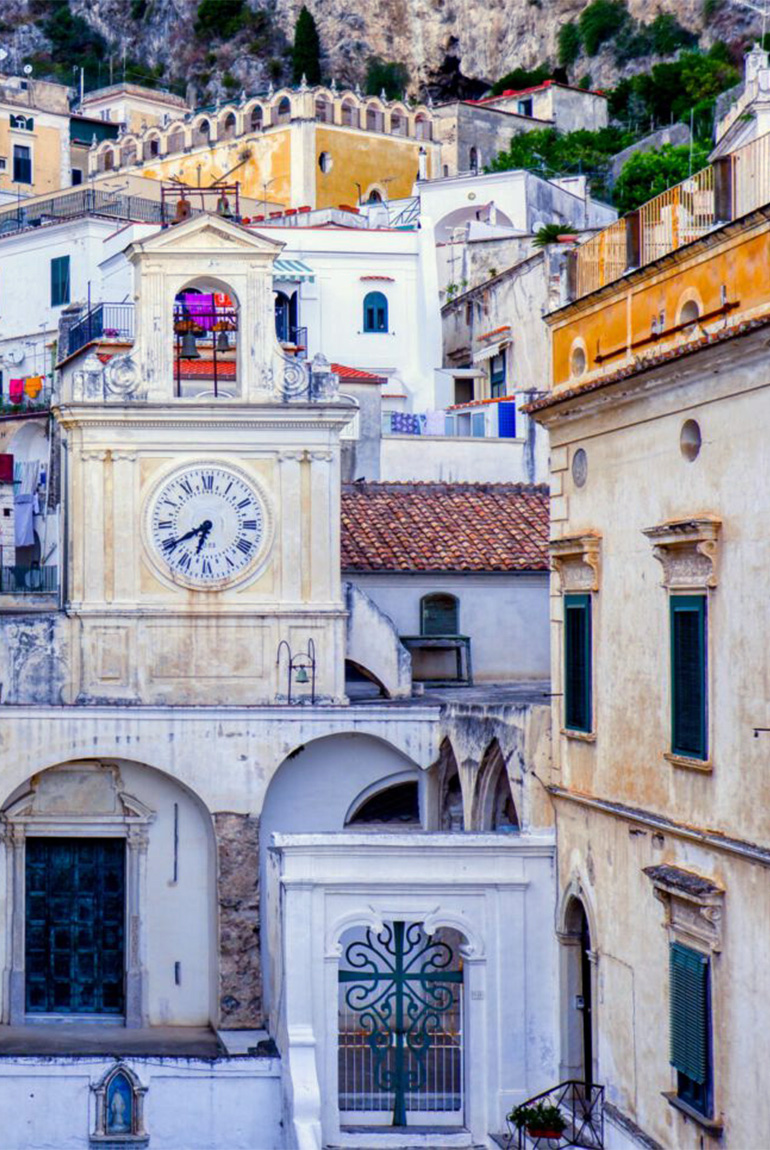 5 minutes by shuttle from Amalfi, then 10 minutes on foot

5 minutes by car, which we do not recommend as there is little parking available

This little fishing village, once part of the rich and powerful Maritime Republic, is a haven of peace and tranquility, with a pretty little piazzetta, home to numerous street cafès and the Baroque Church of Santa Maria Maddalena. 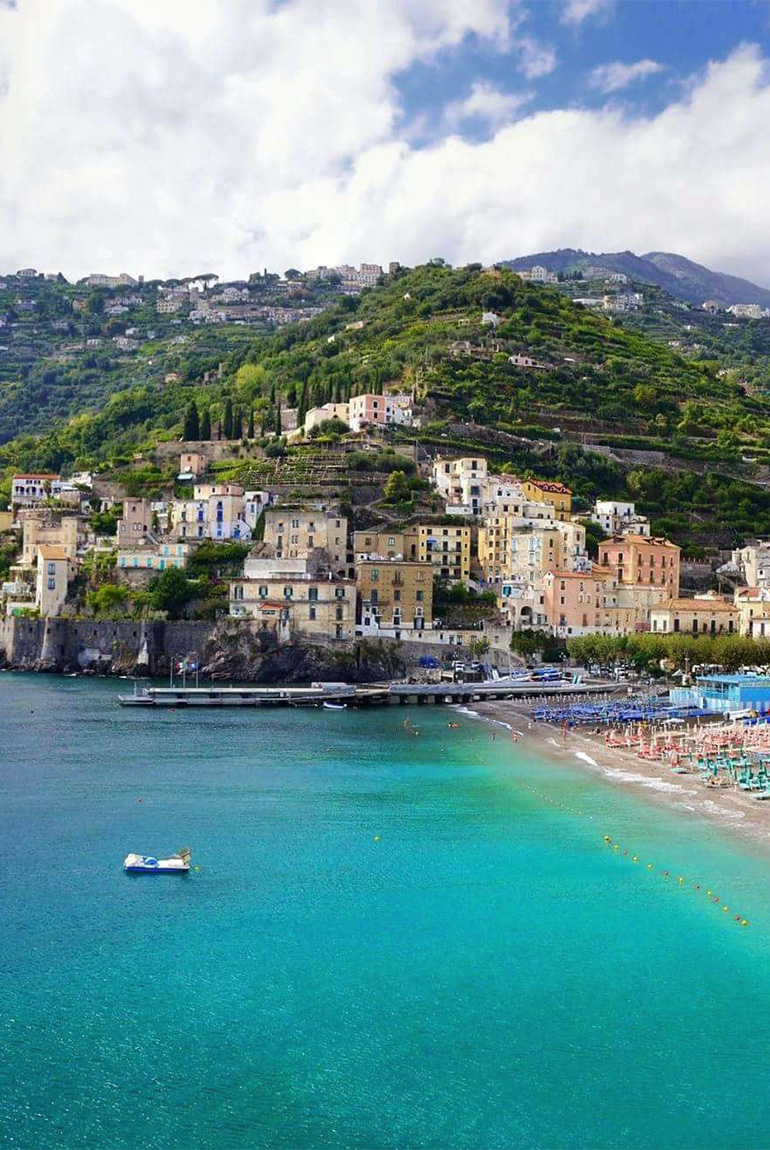 Only a few kilometers south of Atrani lies Minori, with its intricate web of little roads and enchanting seafront promenade.

Minori is famous for its sandy beaches and the citrus groves laden with the most succulent oranges and lemons, but also because of the ruins of a 1st century Roman villa which were discovered here in 1954

15 minutes by car, with limited parking
20 minutes by local bus from Amalfi, tickets €1.10

20 minutes by private boat from the hotel jetty

Not far from Minori, the stunningly panoramic cliff top town of Ravello is rich in historic edifices, such as the Cathedral of San Pantaleone, with its imposing marble pulpit supported by six lions, the Arabian-influenced Villa Rufolo, the historic retreat of artists originating from every corner of the globe, and Villa Cimbrone, built at the start of the last century in pseudo-medieval style. 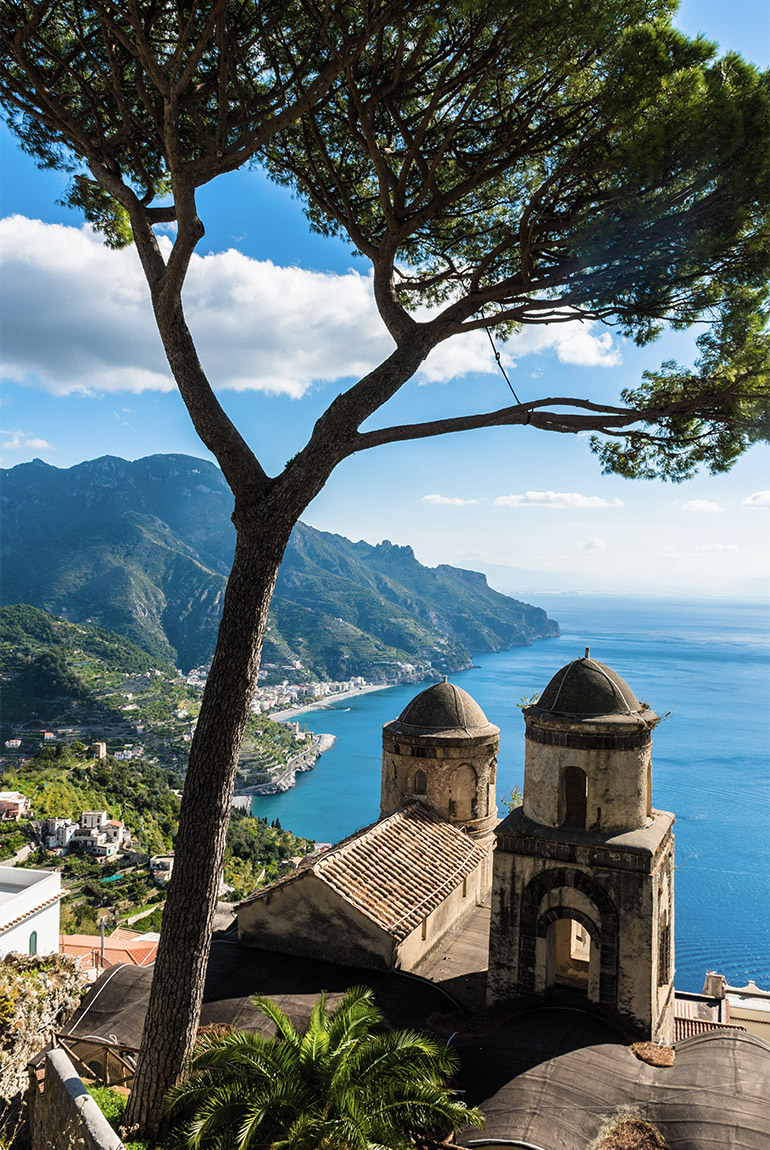 35 minutes by local bus from Amalfi 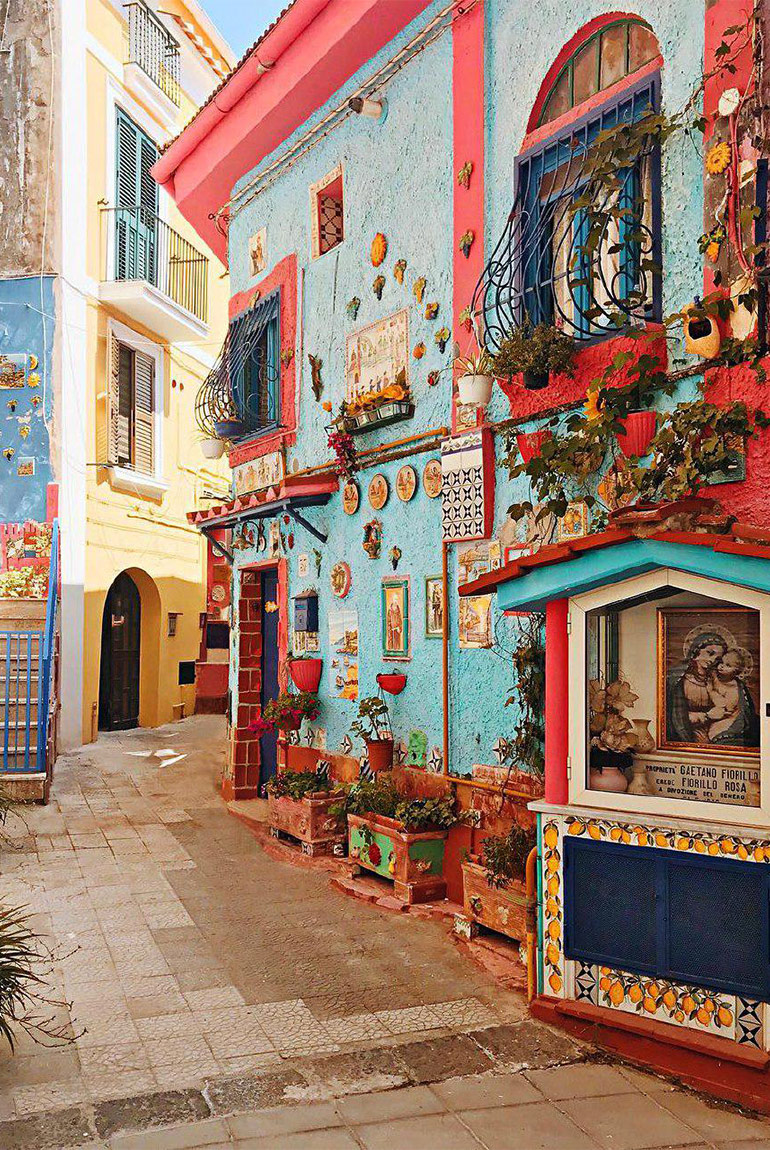 At this stage in the journey, a stop at Vietri sul Mare, famous for its majolica tiles, is obligatory.

The town is filled to the brim with ceramic shops where you can buy vases, jugs, plates, coffee sets and just about every item which could possibly be made with the town’s brightly colored ceramics. The majority of Hotel Santa Caterina’s rooms are decorated with ceramics from Vietri sul Mare.

The seaside city and provincial capital of Salerno lies just a few kilometers away from Vietri. The oldest district of the city was built inland and is characterized by a maze of little lanes and alleyways. 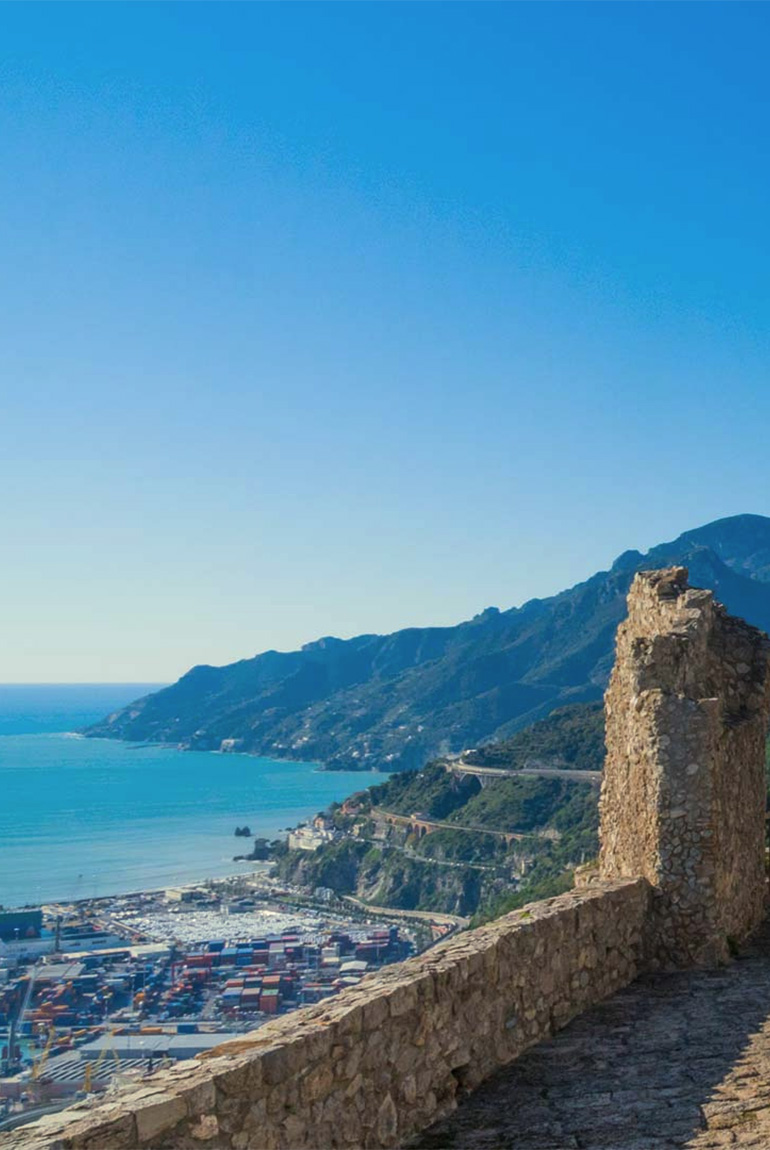 70 minutes by local bus from Amalfi

30 minutes by private boat from the hotel jetty

30 minutes by ferry from Amalfi

The most recently built neighborhoods have been constructed along the coast. Salerno provides a good half way stop before heading on to Paestum which, with its imposing Greek temples, is one of the Italy’s most famous archaeological sites. 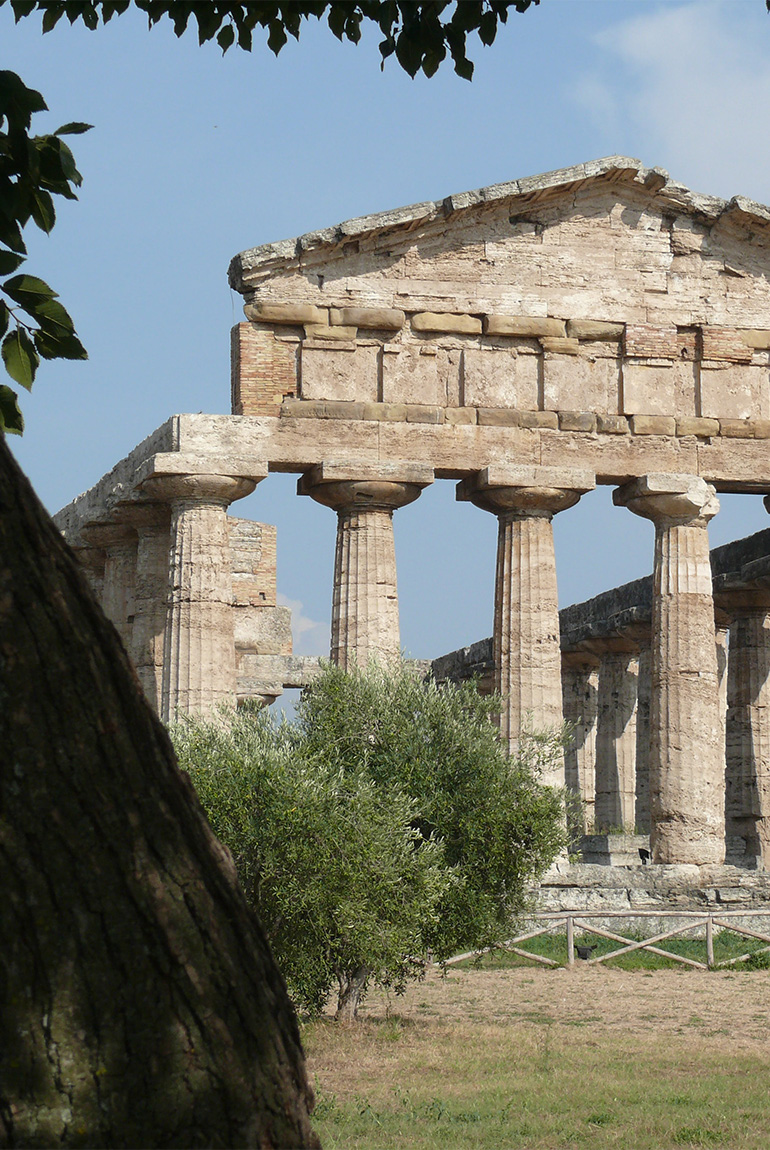 Paestum was founded by the Greeks from Sybaris sometime around the 6th century B.C., and was later colonized by the Romans.

The archaeological site was only discovered in the 18th century during the construction of a road ordered by the Bourbon King Charles III. The sight of the magnificently conserved golden temples dedicated to Neptune, Basilica and Cerere is an unforgettable one.

180 minutes by local bus from Amalfi, changing in Salerno

Amalfi lies within easy reach of another well known town of the Amalfi Coast: Positano. Historic retreat of the ancient Greeks and the Roman nobility, Positano is all but divided in two by the cliff bearing the town’s Transita tower, with the peaceful beach of Fornillo on the one side and the busier Spiaggia Grande on the other. 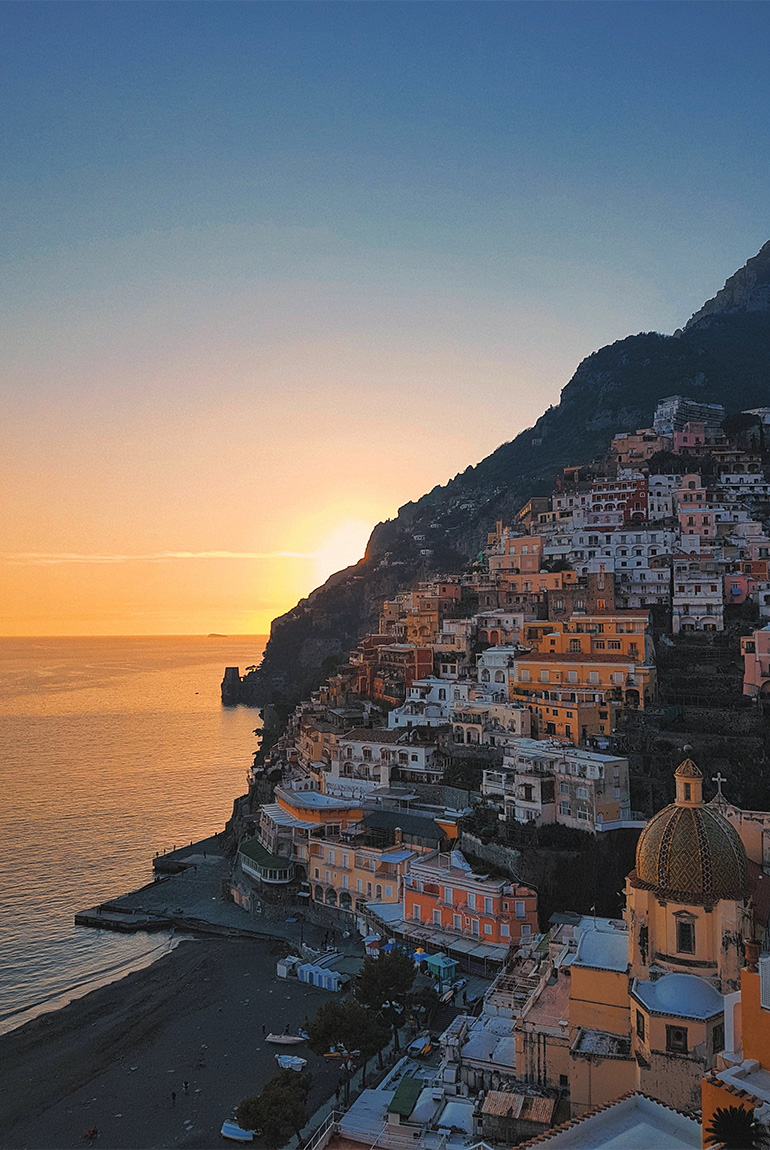 40 minutes by local bus from Amalfi

30 minutes by private boat from the hotel jetty

30 minutes by ferry from Amalfi

Rising up out of the waters opposite the town of Positano lies the archipelago of Li Galli. Legend has it that these three islets were inhabited by the Sirens described by Homer in the Trials of Odysseus. In 1924 the largest of the outcrops became the private residence of the Russian ballet dancer and choreographer Leonide Massine who built a villa here designed by the architect Le Corbusier. In 1989 this jewel passed in to the hands of Rudolf Nureyvev, another Russian ballet dancer of international fame.

The best way for guests to see these little gems, the coastlines of which are punctuated with caves, inlets and secluded beaches, is by renting a private boat and setting off from Hotel Santa Caterina’s private jetty.